What is Virtual Reality good for?

After months of anticipation, my Oculus Rift Developer Kit 2 came in the mail last week. Here are my impressions of it as a device, and thoughts on the future of virtual reality.

My first impression of the DK2 upon opening its unassuming cardboard box was that there are a lot of pieces. This is definitely a development kit. I hit a rough edge almost immediately: the Quick Start Guide has 10 steps before you can see anything in virtual reality. These steps include Step 1: Install the Oculus Software Development Kit, which is in fact insufficient (you also need the Runtime, at least on Windows). The online instructions for installing the SDK are also outdated, showing folder structures that don't exist and calling for things like updating your Rift's firmware before the device is even assembled even though my Rift came with the latest firmware already installed. You also need an HDMI or DVI port on your computer to plug in the Rift, which I had never seen stated anywhere before I spent $350 on the headset. I have two laptops, a Dell Latitude E6510 and a recent Macbook Air, and neither of them have an HDMI or DVI port (the Dell has only VGA and the Air has only mini-DisplayPort). Luckily I had a DVI-to-USB adapter, which works even though the Quick Start Guide explicitly recommends against using anything more than the included HDMI-to-DVI adapter. Additionally, I had to restart the Oculus driver service before it recognized that the DK2 was plugged in for the first time. And trying software is a crapshoot - many of the highest-rated experiences on the Oculus Share site have loads of comments complaining about the software not showing up on the Rift screen correctly.

For my part, once I got the thing hooked up and running, I tried the demo that's included with the Oculus driver. I put on the headset and let out an involuntary "woah." It's a pretty uninteresting demo - it's just a room with a desk - but it's different from anything else I've ever tried. I have a distinct memory of trying a virtual reality experience at booth at an amusement park as a child, but the screen was so out of sync with my movements that I wound up tangled in the cords. The Oculus demo stayed in sync, and I could look under the desk and notice that if the demo wasn't fortuitously aligned with my actual desk I could easily have lost track of where I was pointed. 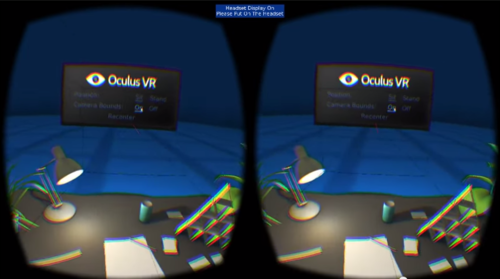 Next I tried downloading a fairly simple demo from Oculus Share, the site where people can upload their VR projects. It ran at a measly 4 frames per second. I guess my four-year-old quad-core Intel Core i7 processor and Nvidia NVS 3100M graphics card need an upgrade! Watch that $350 turn into $2350... poof.

Virtual Reality as a new medium

Above, I mentioned that the Oculus demo was different from anything else I've tried. It feels like a new medium. Just like television was a new medium and photo-sharing networks were a new medium, now we have virtual reality. Just like when previous mediums gained popularity, people will rapidly find new applications that this new medium is suited for. The potential impact is just as large.

Perhaps unsurprisingly, there's not much out there for the Rift yet. Here are some things people have made:

Most of this list consists of games and simulators. This is how you'd expect a new medium to start: by porting things from old mediums. But there's an opportunity to make experiences tailored specifically for virtual reality that remains largely untapped. Here are some ideas:

A number of these ideas would benefit from additional accessories to help make the experience more physical or to capture real-world information.

These ideas work because there are a couple of things virtual reality as a medium is good at:

On the flip side, virtual reality is not good at quick 5-minute games while you're waiting in line for coffee. It also presents a number of new artistic challenges. The three most obvious are whether characters in a scene should react to the viewer, how to draw the viewer's attention to something happening behind them, and what to do when a viewer sticks their head through a wall. Virtual reality is also very much like video games and movies in the sense that far more people will want to watch or play than will be able to create experiences.

I used to work in venture capital. VC's sometimes prefer to invest in platforms over applications. For example, Facebook (a platform) is more valuable than Zynga (which makes Facebook apps). Clearly the Rift itself is a platform, and it's no coincidence that Facebook acquired Oculus. What other platforms will arise on top of the Rift?

We can look at platforms that have manifested on other mediums to start with:

There are probably several more, in particular focusing on the problems of underprivileged communities. In parts of the world where everyone grew up using cell phones and not computers, something like the Gear VR could be very interesting for transactional, communication, education, and safety applications if prices come down enough.

Is VR here yet?

First of all, hardly anyone has the hardware to support it. Only a small number of developers have Rifts so far, and some of those don't even have the video cards to run it without vomiting (myself included). This is a problem because both the headset and the computing hardware is expensive. Second, awareness is low. I run in pretty tech-aware circles, and many of my friends still think a Rift is somewhere you don't want to drop your keys. Even if cost and hardware/setup challenges don't dampen what could otherwise be great word of mouth marketing, there's a huge ramp up before VR will be part of mainstream culture. Third, the DK2 is pretty good, but it's not the device that will take the world by storm. The not-yet-released consumer version of the Rift, known as CV1, may well be that device; however, the latest rumors suggest that it won't come out until at least April 2015. Fourth, the Rift could probably get popular from games alone, but virtual reality needs other killer applications to come into its own, and those mostly don't exist yet.

All of that means it's a great time to be a Rift developer. Now is the time to get in early!

Isaac is a product manager, programmer, author, founder, investor, and game developer. Cookies are his kryptonite.