Today I came across a post on Twitter (via Hacker News) called Cars Kill Cities. It uses Atlanta as an example, and since I grew up there, I feel compelled to explain why the author is way off the mark.

First: is Atlanta -- the 9th largest US city, world's 15th largest economy, and 4th-largest concentration of Fortune 500 companies -- dying? Not at all. Atlanta was hit hard by the collapse of the real estate bubble, but it still has a rapidly expanding, very highly educated population. It's a global economic center with a significant concentration of high-tech and white-collar industries and good local universities. This suggestion is silly, probably a poorly-researched one made out of convenience rather than conviction.

So let's address the topic of the article instead:

Cars do not belong in cities.

Derek apparently studies at Georgia Tech, where presumably he doesn't leave a 4-block radius much; because cars are essential to the rest of Atlanta's 8400 square miles. The dry cleaning service that is closest to my house in Atlanta is a 10-minute drive away (about 5 miles). Certainly an impractical walk, and Atlanta is extremely hilly with few bike lanes or sidewalks making biking impractical. This is intentional. I like living in Atlanta because it's spread out, and not nearly as dense as many other large cities. As a result people spend much more time outdoors enjoying the sunshine and nature -- two activities I'm sure our car-disparaging friend would appreciate. Cars have made cities like Atlanta possible by making it possible to live in beautiful green spaces while still being able to get to school or work in a reasonable amount of time.

In other words, I don't accept the assumption that increasing "walkability" is necessarily a good thing.

Cars simply take up too much space.

Derek uses this delightful picture of Midtown Atlanta to illustrate his point: 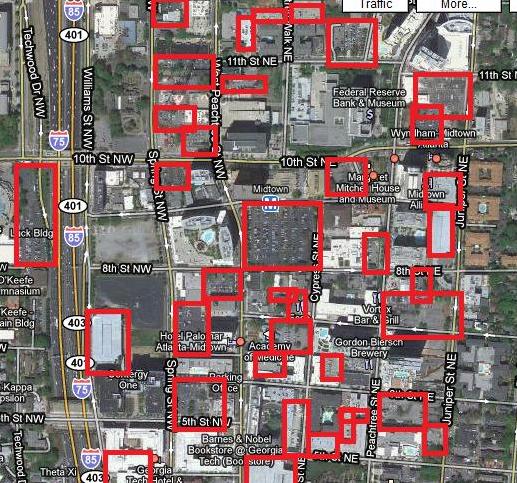 Undoubtedly this picture is the reason Atlanta was chosen for criticism. If I wanted to find a picture with a lot of parking lots in it, this is a pretty good one. But, so what? There's plenty of space to accommodate all of the people who prefer to live in nicer areas and drive to work instead of living in less-nice areas and walking to work. Those parking lots exist for a reason: Atlantans want them there. And don't forget that despite Atlanta's heavily car-using culture, its subway system is the 8th busiest in the country.

I get the sense that Derek has other "car alternative" ideas -- smaller cars perhaps? -- and if there were no trade-offs in speed and comfort I'm sure Atlantans would be open to the idea. But we won't compromise for something that is only artificially better when we still want to live a certain distance away from where we work or go to school. And one only needs to look at the dismal sales of European-style tiny cars in the U.S. to see that making cars smaller is not an interesting solution.

Another note on that point -- although Atlantans do live farther away in terms of distance than residents of many large cities, most of the people I know who actually have long (45+ minute) commutes are people who live close to Atlanta and commute out of it for work.

It wasn’t always this way. Atlanta, like all cities, used to be walkable and people actually lived IN the city instead of commuting 50 miles every day. But as more people moved away from the city, the more Atlanta had to become like a suburb, being retrofitted to handle all the automobile infrastructure required by a million 40 hour-a-week temporary citizens. The result of this retrofit is a wasteland of asphalt and isolated neighborhoods, a slow decimation that has rolled along since the innovation of the automobile.

But "a wasteland of asphalt and isolated neighborhoods"??? That is not an Atlanta that I know and love, nor even recognize. Even the worst parts of Atlanta where you didn't want to walk alone at night have in many parts been cleaned up into commercial areas like Atlantic Station.

If you are going by yourself to pickup your dry cleaning, then cars are insanely over-engineered for the task. It’s like hammering in a nail with a diesel-powered pile driver.

This is the most interesting part of the article. Derek's argument is that cars are overkill for the simple tasks for which they're usually used. Let's put aside the dry-cleaner argument, which I've already addressed.

There's an implicit assumption here that over-engineered tools are a bad thing. That's ridiculous. You're probably reading this on a device that can perform billions of operations per second because it's more convenient than me personally mailing you a piece of paper. If we didn't engineer tools to exceed our typical use cases, they wouldn't be very useful at all. For a closer analogy, consider an airplane. We may not need the several-hundred-million dollars of research that goes into building planes, but most of us wouldn't fly if Boeing skimped on the number-crunching.

That's not to say that there's no value in tools built specifically to perform a certain task. It's just that in this case, people are using cars for the task for which they were designed. How many people do you think actually drive their Jeeps in knee-deep mud in the backcountry like you see in commercials? (The answer: 13% off paved roads, almost none in such extreme conditions.) Cars are built for the city roads where they are overwhelmingly used, not for the once-a-year roadtrip to Florida.

If you can identify something that people often do by using workarounds, that is a great business opportunity for creating a simple, single-purpose tool to alleviate the problem and increase efficiency by taking care of something people were doing manually before. Hipmunk, for example, noticed that people were going between airlines' websites manually to compare prices, so it created a single place where everyone could go to compare prices on one page. While it's true that no one likes waiting in traffic, and Atlanta's rush-hour traffic is notoriously bad even with 16-lane highways, the fact that cars are heavily engineered is not what caused the traffic problem.

As any car rider will tell you, it's much more pleasant to ride in a car than to take a bus or subway. There's a problem and solution: in Atlanta, where walking and bike riding are mostly infeasible by design, if public transportation was cleaner, easier, faster, and less distant, people would use it more.

I can't help but be intrigued by Derek's suggestion that there are alternatives to 2-ton vehicles for picking up dry cleaning. But for such a tool to be useful, it has to meet all of the needs that cars currently do. So far, nothing else has been able to do that.

Isaac is a product manager, programmer, author, founder, investor, and game developer. Cookies are his kryptonite.